Ken Nagahara of Hunter Ranch GC shot a final round 5-under 66 to come in at 3-under 139, winning the title by four shots over co-runners-ups Victor Sallee and Robert Fernandes.

Nagahara posted nine birdies and four bogeys. Sallee and Fernandes had final rounds of 73 and 76, respectively.

Richard Hicks of Modesto GC took the title in dramatic fashion, winning in a sudden-death playoff over Bruce Bartfeld of Peninsula Bell GC.

Both players finished regulation tied at 136. Hicks had a final round 72, while Bartfeld shot 65. Chris Ladd of E-Club San Francisco was third at 139 after a final round 70.

Ray Jones of Poppy Hills Club shot a final round 72 to come in at 6-under 136, winning the title by 10 strokes.

Jones was paced by a first round 64. Ken Weller of E-Club San Francisco was second at 146. Third place went to Eric Shield of Bennett Valley GC at 147.

Doug Midgely and Bob Watson had the shots of the tournament, as both aced the par-3 11th hole.

Victor Sallee, playing out of Windsor Golf Club, took the early lead with a 4-under 67 Monday at Par 71 Poppy Hills Golf Course. Sallee’s round included seven birdies and three bogeys.

Two strokes behind Sallee and in second place is Matthew Webb from Tahoe City GC. Webb fired a 2-under 69. Robert Fernandes, of Par 5 Golf Club, is alone in third after shooting a 1-under par 70.

After a blistering 7-under 64, Richard Hicks from Modesto GC has a five stroke lead. Hicks’ round featured ten birdies and three bogeys to earn the first round lead.

Chris Ladd, of eClub San Francisco, and Malcolm Wilson, from Sharp Park GC, find themselves tied for second after shooting rounds of 2-under 69. Thomas Blach, a member of Ibew 595 & Friends, is in fourth place after a 1-under 70.

Ray Jones, from Poppy Hills Club, shot a 7-under 64 to take the first round lead. Jones utilized his home course knowledge posting eight birdies and an eagle, offset by three bogeys, for a four stroke advantage.

Chasing the leader is Jeff Goering from Bennett Valley GC after posting a 3-under 68. Richard Jones is in third with a 2-under 69. 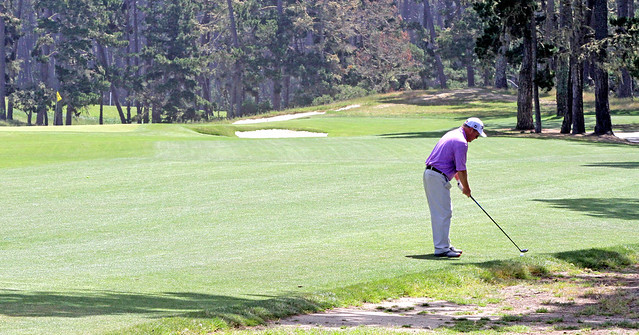