Tahoe Paradise GC shot a final round 9-under 133 at par-71 Poppy Hills to take the title at the South Sierra Zone Championship.

The Tahoe Paradise GC team, made up of Bryan Steele, Steve Cline, Allen Vogt and Colby Gunsch, finished the event at 22-under 260 to beat Wawona GC and Greenhorn Creek by one stroke. Tahoe Paradise GC had four birdies, two eagles, one double-eagle and two bogeys on their card playing in a format that takes the two best net scores of a four-man team.

Greenhorn Creek took the second qualifying position after a one-hole playoff. Their team, including Chris Niehuis, Tom Ten Eyck, William Burr and Ray Walker, shot a final round 10-under 132 for a 21-under 261 tournament total. Greenhorn Creek’s scorecard included four eagles and six birdies, along with one bogey and one double-bogey. Wawona GC shot a 12-under 130 on the final day.

It’s a packed leader board after day one of the annual South Sierra Zone Championship.

Tahoe Paradise GC and Apple Mountain GR are tied at the top after shooting 13-under 127 at par-70 Carmel Valley Ranch. Tahoe Paradise GC, including teammates Bryan Steele, Steve Cline, Allen Vogt and Colby Gunsch, made six eagles, four birdies, along with two bogeys and one double-bogey in a format that takes the two best net scores on a hole from the four-man team.

The team from Apple Mountain GR, Chris Mateo, Mark Lee, Bill Sowders and Steve Dringenberg, had eleven birdies, two eagles and one double-bogey during their opening round.

Two strokes behind the leaders in third place is Greenhorn Creek carding an 11-under 129. Wawona GC shot 9-under 131 and is in fourth.

Tuesday’s final round will see play shift over to par-71 Poppy Hills. Only the two low teams following play will advance to this year’s NCGA Zone Championship, slated for August 27-28 at Poppy Hills and Spyglass Hill. 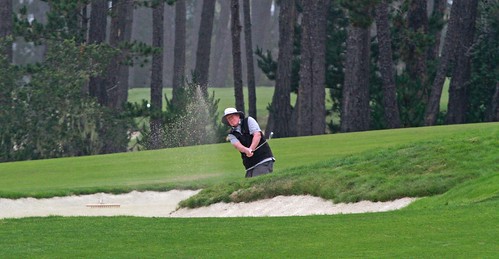