Teammates Travis Valenzuela, David Paulsen, Lee McGowan and Tony Condensa from The Ridge GC shot a final round 7-under 133 at par-70 Carmel Valley Ranch to earn a one shot victory over Cold Springs GCC. Their round included two eagles, six birdies along with three bogeys to post a 21-under 261 tournament total.

Cold Springs GCC finished in second place posting a 12-under 128 to finish at 20-under 262. The roster from Cold Springs GCC, including Ryan Jaurequi, Shaun Verner, Steve Jetton and Jesse Parrish, had one double-eagle, two eagles, eight birdies and three bogeys on the day. Both The Ridge GC and Cold Springs GCC earned automatic spots into this year’s NCGA Zone Championship, slated for August 27-28 at Poppy Hills and Spyglass Hill.

The Ridge GC has a commanding lead after day one of the annual NCGA East Sacramento Zone Championship.

The Ridge GC, made up of teammates David Paulsen, Travis Valenzuela, Tony Condensa and Lee McGowan, shot a 14-under 128 to take a five stroke advantage. Their round included a double-eagle, three eagles, six birdies and one bogey playing in a format that takes the two best net scores of a four-man team.

In second place at 9-under 133 is Morgan Creek GC. Cherry Island GC, Cold Springs GCC and Cameron Park CC are tied for third after rounds of 134.

Only the two low teams will earn automatic spots into this year’s NCGA Zone Championship, slated for August 27-28 at Spyglass Hill and Poppy Hills. Friday’s final round will see play shift over to par-70 Carmel Valley Ranch. 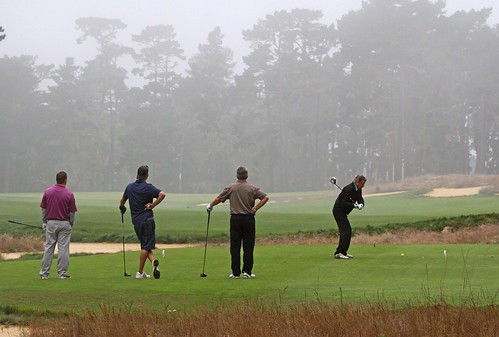