Young Kim and Alex Cho took the title, carding a second round 9-under 63 at Del Monte GC to come in at 11-udner 132. Second place went to Kathy and Dan Anderson at 135 following a 67. The teams of Ron Smith-Arizmendi and Lisa Grove and Kelly and Jim Simpson tied for third at 137.

Michelle and Roderick Stewart took the crown, shooting a final round 70 at Del Monte GC to come in with a two-day score of 4-under 139. Second place went to the tandem of Arlene and Frank Yost at 140 after a final round 7-under 65. Third place was won by the team of Josie and Kurt Garcia at 141.

Jeanne Benedetti and Carl Thoreson finally got the win. Benedetti and Thoreson, who’ve been in the running before only to come up short, shot a final round 6-under 66 at Poppy Hills to come in at 10-under 133. The teams of Michelle Sherpa and Tashi Sherpa and Hao Jiang and Pheobe Yu tied for second after rounds of 60 and 68, respectively. The Sherpas would earn second place after a card-off.

The teams of Simon Tao and Melynda Yi and Keith and Pam Passaretti had to go to extra holes after both came in tied after regulation at 9-under 134.

Tao and Li had a final round 69 while the Passaretti’s made a charge with a 65. Third place went to the team of CIndie Young and Mike Winkenbach at 137 after a 69.

Ken and Ana Yamauchi grabbed the first round lead, carding a 5-under 66 at Poppy Hills GC. Just a shot back at 67 is the team of Kelly and Jim Simpson. The teams of Dan and Kathy Anderson and Eden Anderson and Bob Burnett are only two behind, tied at 68.

Josie and Kurt Garcia are the team to chase after the duo posted a 5-under 66 at Poppy Hills. Tied for second at 69 are the teams of Michelle and Roderick Stewart and Megan Cohill and Adam Sepulveda.

There’s a logjam at the top, as the teams of Carl Thoreson and Jeanne Bendetti and Frank and Louise Doyle share the lead after matching first round scores of 5-under 67 at Del Monte GC. The tandem of Hao Jiang and Pheobe Yu is just two back at 69.

Melynda Li and Simon Tao are the leaders after a first round 65 at Del Monte GC. In second place at 67 is three teams: Brian Armbruster and Joyce Glatt, Daphne and Bruce Scarborough and Cesar and Julie Lopez. 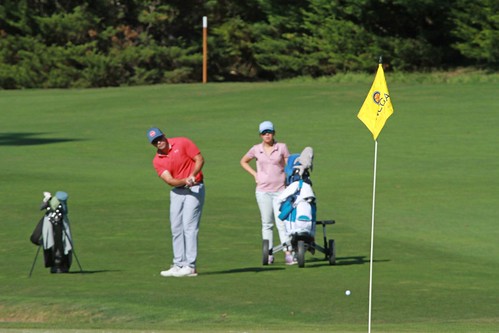